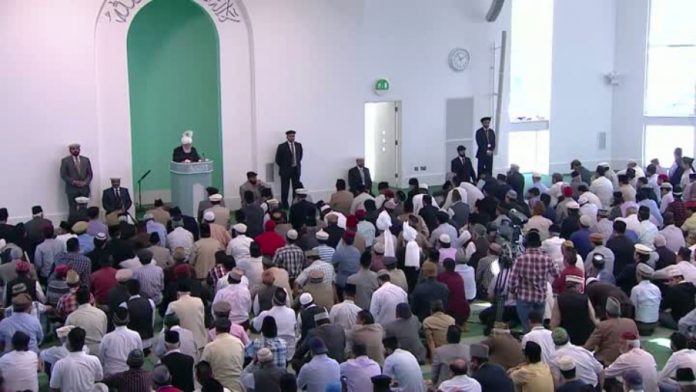 Congratulatory letters and faxes are being received from around the world on the successful conclusion of UK Jalsa Salana expressing the benefits derived from watching the proceedings on MTA. Real benefit and beneficence of Jalsa can only be attained when whatever is seen and heard is made a source of spiritually adorning one’s life. Certainly no political or worldly matters are discussed at Jalsa, in fact when some distinguished non-Muslim or non-Ahmadi guests briefly address Jalsa most of them are mainly impressed by the spiritual atmosphere of Jalsa and base their comments on the teachings of the Jama’at. Jalsa is of course truly beneficial when all that is heard is put in practice by members of the Jama’at. Otherwise all the praise extended by the guests will be about something superficial. There needs to be uniformity between the inner and outer self of true believers.

The world has started noticing us. Ahmadis as well as some non-Ahmadis around the world watch Jalsa proceedings on MTA, in particular Jalsa UK is watched in-depth. Hundreds of thousands are spent on MTA so that every member of the Jama’at has access to our objective. Our delight should not be limited to attending Jalsa and watching MTA broadcasts. Those who attend it in person and those who watch it around the world should practice what they hear at Jalsa in their lives and should be grateful to God that in this age of materialism He has made a worldly source a means of betterment for us. Betterment in terms of knowledge, practice and creed. It increases our faith when various means of communication and media work for us. This is something which was foretold 1400 years ago that certain inventions will assist faith. This should make us turn further to God and be grateful. God states: ‘…If you are grateful, I will, surely, bestow more favours on you…’ (14:8). The subject of gratefulness shows one the ways of gratitude to God as well as gratitude to man. As the Holy Prophet (peace and blessings of Allah be on him) said one who is not grateful to man is also not grateful to God.

Jalsa volunteers were enabled to organise and carry out a vast number of departments, including MTA. These volunteers were men, women, children the elderly and youngsters who tried their best to serve. These volunteers come from different walks of life and include CEOs, doctors, engineers and other professionals but they carried out duties which may be far-removed from their day jobs. Some of them happily stand and attend to hundreds of huge pots of food cooking on fire, even teenagers do this work cheerfully. Groups of men and women clean toilets most selflessly, others drive the elderly and disabled in buggy carts from one point to another. Children serve drinking water in the heat while groups of men and women serve food to the guests. There is also the very important and extensive department of security. In short each volunteer whether or not he is familiar with a particular task, carries it out with great passion and to the best of his ability. There is also the task of winding up post-Jalsa. There has been a lot of rainfall after Jalsa which has impeded this task somewhat but Khuddam are carrying out the work just as they carried out the installation of Jalsa beforehand. The winding up task is quite critical as it has to be done within a certain time span given by the local Council. Any breach of this could make difficulties in holding Jalsa at the site the following year. This year Khuddam from Canada have joined the UK Khuddam in the wind up task and have helped a great deal. They also deserve our thanks. We are indeed grateful to all the volunteers, men and women alike, indeed they are deserving of gratitude. On behalf of the volunteers Hazrat Khalifatul Maish also thanked Jalsa guests and said there were just the odd few complaints received this year.

Many dignitaries came to the Jalsa and expressed their appreciation. God covers our weak points and the guests only see the positive points.

A minister from Uganda said that he was amazed by the organisation of Jalsa and felt that those serving appeared like angels. Even if something was asked of them umpteenth of times, they complied cheerfully. Praising various exhibitions at Jalsa he said that the way the Jama’at is working it will be triumphant in the world in the next few years. He appreciated the message of peace given at Jalsa.

A judge from French Guyana said that when he came to the Jalsa he had pain in one leg which miraculously went away as soon as he came to Jalsa.

Chairman of a Nigerian TV station who has been to Hajj said that he felt he was in the plain of Arafat. He said he had never seen a sight like this before and found the level of obedience to Hazrat Khalifatul Masih peerless.

A judge from Congo said that being a judge he had the insight to discern the truth from pretence. He said he found the Jalsa to be a demonstration of what he had heard about the Jama’at and found it a true picture of Islam.